Here’s some photos, like I promised. They were taken last night by my older son’s girlfriend, using her cell phone so they aren’t the greatest. I was hoping to get some of just the kittens with my camera, today, but every time I got the camera ready Sabrina would always return from her latest stretch around the house. It’s like she knows.

Here’s the first. Poor Sabrina had her head chopped off, but aren’t the kittens adorable? They are a day old in the photos. Two days old, today. 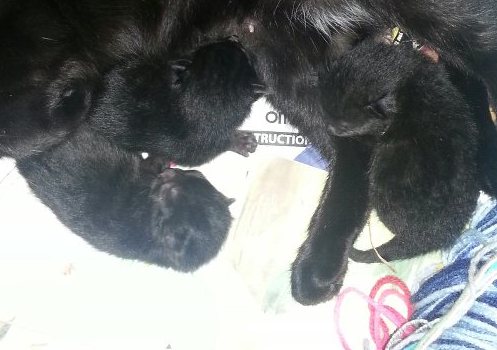 This one is a bit better, even though it shows more of the mess Ribbon made just before Beanie giving birth (thankfully it’s scrap yarn and unimportant papers). Ribbon is my other feline assistant, and she has not been too happy with the ordeal. She even attacked Sabrina multiple times while she was in labor. Needless to say she has been banned from the room until the kittens can fend for themselves. I’ve tried to coax Beanie into moving the kittens into the box I had set up for them – both because it will keep them safely confined to one spot, as well as give me the chance to clean and scrub the area. It looks like I may have to move them there myself. Hopefully Sabrina’s trust of me extends to relocation.