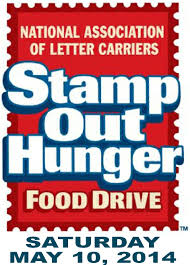 Every year, on the Saturday before Mother’s Day, the USPS holds its annual letter carrier’s food drive. Just before the drive postcards, and sometimes bags, are left for postal customers to remind them to leave donations of food by their mailboxes on the morning of the drive. These are picked up by the letter carriers and dropped off at a nearby food pantry. The postal workers that do this are usually volunteering their time.

The Arlington Food Pantry has existed since 1990. It’s limited to serving only Arlington residents, however that’s not necessarily a bad thing. It allows them to better serve those in their own community and they’ve received a good deal of praise for it. My family had used their services for a several years – really helpful when you’re low-income and raising two boys. After we moved to Winchester we continued to volunteer a couple of hours each month as a way of saying “thanks”.

My husband and I been volunteering at the Arlington Food Pantry for the letter carrier’s food drive for… well I can’t even remember how long. In fact some have joked that I have earned badges for my mad date checking skills (the AFP doesn’t accept expired food). You would not believe the age of some of the donations we get! Anyway, I missed last year’s drive because we lost our primary car a year and a half ago so it was really good to see everyone, again, this year.

We had initially planned to arrive at 12pm and stay only a few hours. Usually donations start showing up at that time and the main bulk arrive between then and around 3 or 4pm. Yesterday, however, there was nary a bag to be found. One of the regulars told me that the previous year someone new had taken over handling things from the PO side and, because of it, they didn’t start seeing donations arrive until 1pm. They were expecting the same this year. 1pm came and only half a bag had arrived. We  received a few more bags shortly afterwards and then a few more after that. Then about 2:30 it went dead.

Needless to say the volunteers began to worry. It wasn’t until nearly 4pm that we started seeing drop offs with the typical frequency – only 4 hours late. My husband and I agreed to stay until 5pm, now that food was finally coming in (we ended up staying and extra half an hour because our son, who was our ride, fell asleep and forgot to come get us). When we left donations were still being dropped off so I’m hoping it was just a delay and not lack of participation due to people not knowing. I’ll have to text my friend on Monday to see how they did. BTW, the oldest donation this year was an item that expired in 1998.

If you missed this year’s letter carrier’s food drive but would still like to give, most food pantries make their information available online. Just Google “food pantry” for your city or town. They will be able to tell you what they accept and the best time to drop it off. Even one bag is good because it’s one more bag they wouldn’t have had otherwise. And remember, it happens every year on the Saturday before Mother’s Day so mark your calendars for next year.

If you did leave a donation out for your letter carrier, thank you.